THE EDITOR Thomas Wang and HIS MISSION

THE EDITOR and HIS MISSION

-- From Book: America, Return to God 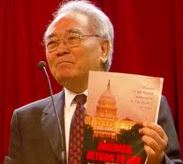 Thomas Wang was born in Beijing, China in 1925 into a third generation Christian family. He left China in 1949, lived in Hong Kong, Taiwan and Europe, and finally came to America in 1958. In1953 Thomas Wang began to serve as a fulltime minister. He was used by the Lord to found the Chinese Christian Mission and the Chinese Coordination Center for World Evangelism. He was invited to serve as international Director of the Lausanne Committee for World Evangelization,  as well as the Director of Lausanne ll in Manila,1 989. He then served as International Chair Man of the AD2000 and Beyond Movement. He is currently (2009) President Emeritus of the Great Commission Center International in Sunnyvale, California.

In addition to the above mentioned global ministries, God has laid upon his heart a genuine burden and love for his second homeland America. For over 20 years, Dr. Wang has been waging a letter-writing campaign for spiritual renewal of America through his annual correspondences to leaders of this nation.

America's founding fathers knew that to build a nation as a "city on a hill", our faith and trust in God is indispensable. Therefore God's name and authority were mentioned and recognized profusely in many of our national documents, monuments and buildings so that ourselves and our posterity will not forget.
Yet America in recent years has been steadily drifting away from God. She has become not only non-Christian but anti-Christian in many ways. God is being driven out of her government, society, schools, media and public lives! The hour is late. But if all God's people would stand up, speak up and pray, the tide can still be turned. America's spiritual suicide can still be averted!

Being a naturalized citizen of America, Thomas Wang has a deep conviction that Christian immigrants in America, who have been greatly benefited by this nation in areas of education, opportunities, securities, religious freedom etc. should contribute to America's national and spiritual well-being. Let all Christians pray for a spiritual renewal and repentance that America will continue to be a God-fearing nation and a channel of blessings to the world.

May we urge all Christians to uphold this great nation in prayer so that America's third centennial will equal in greatness to the previous two and that she will maintain her spiritual vitality which characterized her founding two hundred years ago. Such is the purpose of this book.

THE EDITOR and HIS MISSION